A Child’s Description of AD/HD 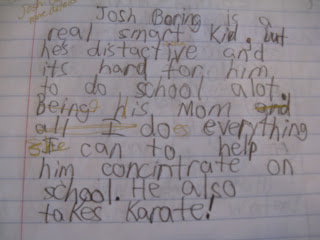 This is a page out of Josh’s journal. It’s a concise entry. He was in middle school at the time, and was taking a composition class with our homeschool support group. The assignment was to tell a little about himself. Except for the final four words, his entire description relates to his AD/HD. Even his initial description of himself as a smart kid is immediately followed by “but”… and goes on to describe some of his ongoing struggles. Josh knew he was smart. He also knew that he was easily distracted and had a hard time completing his work. Even this brief journal entry took him a long time to write due to his distractibility and difficulty with paper and pencil tasks. The handwriting and spelling are not great. But look beyond that for a minute and see the hope peeking through. Josh started by acknowledging his awareness that he is smart, despite his many challenges. He mentions the difficulties matter of factly since they are part of his experience, but they do not entirely define him. It encouraged me to see that Josh realized that I was trying to help him, not “fix” him or change him, but truly help him. With that insight Josh could listen to my suggested strategies knowing that I didn’t view him as defective but rather as clearly in need of help. Finally, Josh ended with another positive comment. The exclamation point says a lot. It’s not just that he is in karate classes, but he is enthusiastic about karate. So although at first glance this journal entry might appear discouraging, a closer look at the content reveals a healthy balance. Josh knew he had struggles just as he knew he had strengths. This promotes a healthy view of himself, acknowledging his AD/HD while refusing to be defined by it.
It is so important to build up our children in truth, recognizing and pointing out their gifts and strengths. Kids with AD/HD get corrected and directed a lot. They may be very aware of their differences. Others seem oblivious but still need to develop an accurate perception of who they are. Until our children have achieved a realistic perspective of themselves, we need to take advantage of opportunities to help those with learning challenges see the contributions they make in our lives. We need to direct their attention to all the things they do well, even as we are teaching them and redirecting them in their areas of struggle. This developing sense of identity is what you can see emerging when you read Josh’s journal entry.

2 Responses to A Child’s Description of AD/HD