ADHD Secrets My Teacher Should Know

Posted on February 5, 2014 by melinda in AD/HD, ADD, educational, encouragement | Leave a comment

Link to Melinda and Josh’s article in ADDitude magazine.

A student with attention deficit gives advice to his teacher to bring out their unified best in the classroom.

Posted on July 8, 2011 by melinda in character development, educational, encouragement | Leave a comment 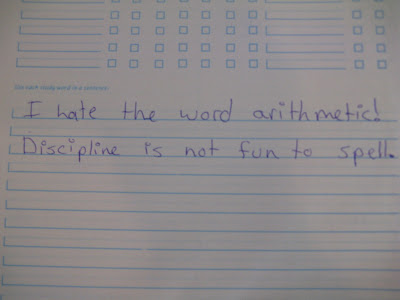 Discipline is not fun! The example above shows just what my daughter thought about having to practice her spelling words and then use them in a sentence. She became especially frustrated if she missed the same word several days in a row and had to go through the practice exercises. I thought of this discipline as a training technique to improve and develop her spelling skills and character. My daughter viewed it as punishment for being young enough that she was forced to learn to spell words and live up to adult expectations for her education.

How many of you teachers and parents would give in to your child at this point and not push them further? No one? That’s what I thought. We push our kids to greater levels of achievement, not out of some malicious sense of payback for what we endured as children but because we know that giving up is rarely helpful. Learning to stick with a task, even one that is hated or just not fun, is something that everyone must come to terms with sooner or later. As adults we understand that hitting the wall a few times until we accomplish something makes the success all the sweeter. Likewise, giving up leaves a lingering sense of failure that is hard to eradicate.

In the example portrayed above, you probably noticed an unenthusiatic attitude about doing schoolwork. I did talk to my daughter both about the need to persevere and the need for self discipline. These two things generalize far beyond the academic realm and into many aspects of everyday life.

As I talked with my daughter, I tried to help her see that working at mundane tasks was just a part of everyday life. As a child, it might include her school work and chores. As an adult, it would encompass caring for a home and completing whatever work she had committed to do.

Here’s the rub: if a person does not learn to discipline himself or herself, there will be others who will gladly discipline them. If you don’t like being told what to do, don’t wait when you see something that needs to be done. Take initiative, and no one will have to tell you what to do because you’ve already taken care of it. Learn to think for yourself and develop your own convictions, because if you don’t there will be plenty of people who will gladly tell you what to think and how to act on their beliefs.

Your child may think learning to spell and do schoolwork is a pain. But it is a character growing kind of pain with a bigger purpose beyond mastery of an academic skill set. As it says in Hebrews 12: 11 “All discipline for the moment seems not to be joyful, but sorrowful; yet to those who have been trained by it, afterwards it yields the peaceful fruit of righteousness.”

Mom and the Mat

Posted on February 19, 2011 by melinda in encouragement, struggling learners | 2 Comments

My typical exercise pattern is to walk several times a week. I walk the dog, walk around the park, and walk on a treadmill. Then I thought about how my daughters and their friends seem to really get a good workout doing the video game Dance Dance Revolution (DDR), and they have a lot of fun exercising to the music. So I decided I would give it a try, and my family presented me with my own DDR program that included the dance mat. The program has a number of options, including dancing with a friend if you have more than one mat. The “classic” mode is to step on the mat in the same pattern that is displayed on the screen. I could also try to match the game’s movements with my arm motions as well as stepping on the right spot at the correct time, but quickly decided I should hold off on that until I mastered the footwork part. The criteria I use for selecting songs is to find the lowest BPM (beats per minute) in hopes that I will be able to keep up with a slower song. Some of the song possibilities are “oldies” so I am familiar with them. Others I have never heard of, including one song that my middle-aged eyes misread as “Plastic Breath” so I selected that song out of morbid curiosity. Turns out it was “Plastic Beach”, which was not nearly as interesting. It has been fun to exercise with the DDR, although it has made me think about the experiences of a struggling learner as I work hard to get the moves right and it’s immediately followed by a screen with feedback listing how I performed. The screen shows my statistics for various aspects of the routine, and in bold print on top of the categories is the message “Try Again”. Are you kidding me? I just stomped and hopped around for an entire song, and despite my best attempts I get “Try Again”? How about some encouragement? Maybe something like “Hey, you’re back! Good for you for exercising again!” Or at least “Nice try. Keep up the good work.” My children offer feedback as they watch me work out on the DDR mat, and they kindly don’t connect the second mat to join me in my workout since it would be like me competing with Happy Feet the penguin. They gently offer pointers, such as “Mom, you know you have two feet, right?” Apparently in addition to be right-handed I am also right-footed, since my natural inclination is to do all of the stepping with that foot. I was also informed that stomping harder on the mat does not increase speed or accuracy. At least that information is useful to keep in mind, unlike the discouraging message to try again. I actually got a more positive message when all I did was walk to the customer service desk at the grocery store to throw a piece of trash away. As I approached the desk, a mechanical voice informed me, “You’re a winner!” Of course, it was to entice me to play the lottery, but at least it was more positive than my perpetual DDR message telling me that basically my best efforts just aren’t good enough. Students with learning disabilities or attention challenges also hear “Try again” over and over. While it’s true that many times tasks do have to be redone, I think we should at least try to acknowledge something positive even if it’s just to recognize that effort has been made. Everyone needs to feel successful at something. Fortunately, I am not training for any DDR competitions and my intent is simply to have fun while I exercise. I know there are other things I am good at doing, and I am more annoyed than discouraged with the DDR’s observations of my performance. Our children likewise need to know that there are things they can do well. Sometimes it is in the academic realm but often it is in a different venue. It is vital to help them find something that they can enjoy and feel confident in their ability to perform. My children found success in creative endeavors through art activities. They also enjoyed personal accomplishments through the sports of martial arts and swimming, two activities that help burn off excess energy and that can be engaged in year-round. Homeschooling allowed me to build in daily encouragement in addition to all the necessary corrections and redirections. My experience with the DDR program reminded me how discouraging it can be to have feedback limited to “Try again!” when despite my best efforts the standard for success still seems out of reach. Our children need the acknowledgement that we recognize their efforts in addition to the results, and not crush them under the weight of too many “Try again” messages.