Geography: She’s having none of it!

Posted on October 23, 2009 by Scott in AD/HD, homeschooling | Leave a comment 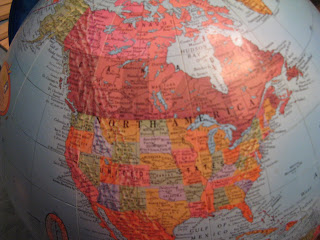 I’ll admit that I’m not strong in geography. I have a feeling that my children learned as much from the PBS show “Where in the World is Carmen Sandiego?” as they did from me. But I’m o.k. with that. As long as they learn it, I’m happy. I do have some good geography materials by Cindy Wiggers, and I made it through all of the U.S. Geography book with my children. At least at one time they could name the states and capitals, and they know how to label mountains and rivers on maps. My daughter Beckie and I are currently working on world geography. I am learning it along with her, since if I ever knew this information the files must have been deleted somewhere along the way. (When this happens, I blame one of the car accidents I’ve been in for killing off some brain cells. They’ve been minor accidents, but I think whiplash and trauma might have messed with my brain for stuff like geography.) While we were learning about North America, we pulled out maps and had the globe in front of us. I would ask Beckie to locate various landmarks, oceans, etc. Following along in my curriculum instructions, I asked Beckie to find Nunavut. Beckie, whose AD/HD manifests in both a short attention span and a tendency to blurt things out, is not good at hiding her frustration. She glanced at the globe for a few moments, then informed me that she didn’t see “None of it”. Ah…and did I mention she has auditory processing difficulties as well? Being the adaptive instructor that I am, I showed her the spelling of “Nunavut” and encouraged her to look pretty far north on the globe. With that support, she was able to find it but continued to tell me that she could find “None of it” for several other items that day since she was amused by her own misunderstanding and pun. At least she’s having some fun during a subject that does not hold her attention easily.