The Magic of Tootsie Rolls

Posted on May 31, 2010 by melinda in AD/HD, Executive Functions, parenting, struggling learners | 9 Comments 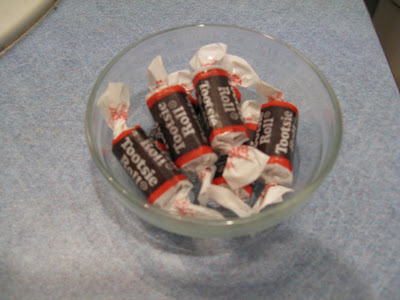 My daughter, Beckie, has AD/HD. Now that she’s a teenager, her primary challenges are with the executive functions (EF) like planning, organization, and working memory. She also continues to need more prompts and external rewards than her peers without EF challenges.

Beckie and her sister have been sharing a hair dryer for years. It is important to Beth, the older sister, to have the hair dryer put away after use. Beckie couldn’t care less if the hair dryer gets put away, so there is little internal motivation on her part to do so. Remember, anything that requires extra steps is not popular with our kids or adults with AD/HD. Additionally, they need more frequent rewards than their “neurotypical” peers. This need often extends into adulthood.

The hair dryer wars went on for a while, with hard feelings on both sides. Since the girls were not able to work out their differences and the hostility was escalating, we met as a family to problem solve together. If something didn’t change, the hair dryer wouldn’t be the only thing to blow at our house. At one point in the discussion, Beth told Beckie she just needed to remember to put the hair dryer away. “After all, you are a teenager. It’s not like I’m going to give you a Skittle every time you remember to put it away. You just have to make yourself do it.”

When I heard Beth say that, it was a light bulb moment for me. Having recently attended a conference on Executive Functions, it was fresh in my mind how the presenters shared that many with EF struggles will continue to be externally motivated throughout their lives. Since the EF challenges continue throughout the lifespan, affected individuals also continue to need more encouragement, praise, recognition, and rewards than those without EF struggles. This explains why my husband, who regularly makes the coffee, asks me how it is sometimes before I’ve even taken a sip. My first thought is, “Um, it’s fine. It’s always fine?”

I’ve come to realize that my husband needs that frequent positive reinforcement because making coffee and doing other chores is not intrinsically satisfying to him. He needs to know that his efforts are appreciated. Once I understood that, and realized that my son with AD/HD is the same way, I trained myself to make a point to express thanks for even mundane, everyday things. They need that. I can easily give them that. So when Beth made the comment about Skittles, I realized that Beckie was getting no reward when she remembered to put the hair dryer away. She honestly tried to remember, but since having the hair dryer put away was meaningless to her and she is highly distractible she often forgot. Since it wasn’t important to her in the first place, she experienced no internal satisfaction when she completed the task.

I devised a simple plan to help Beckie be more successful, and hopefully end the hairdryer war or at least reach a truce. Knowing that she loves Tootsie Rolls, I bought a bag of miniature Tootsie Rolls and put them in a small bowl in the bathroom. I told Beckie that every time she remembered to put the hair dryer away, she could have one Tootsie Roll. Beckie thought it was a great idea.

Now some of you are thinking, “Why should a teenager need a treat to do what she is supposed to do? Won’t that just keep her dependent on external rewards?” Good questions. Here’s what I think. By showing Beckie a simple way to motivate and reward herself, she is learning a strategy that she can eventually use on her own. Because her EF difficulties are likely to continue into adulthood, she absolutely needs to figure out ways to reward herself. Would it bother you as much if she were buying the Tootsie Rolls herself and using them as rewards for completing tasks? Probably not, because most of us do this in one form or another. I’m just showing Beckie an example of what she can do to keep herself motivated and on task. In the future, she will know how to do this for herself.

Asking Beckie to try to remember to do a task that was not important to her just didn’t work. She meant to, intended to, sometimes did remember to, but not with adequate consistency. Now, every time she goes into the bathroom, she sees the little bowl of Tootsie Rolls. It is a visual reminder and incentive several times a day, even though she only dries her hair once a day. She is aware that one of those treats will be hers if she remembers to put the hair dryer away. Guess how many times she has forgotten to put it away since the Tootsie Roll plan has been in place? Zero! She has not forgotten to put that hair dryer away a single time, and it has been several weeks since we implemented the plan. Did this teenager benefit by an external reward system? The results would indicate an absolute YES!

The hair dryer war seems to have ended peacefully, and Beckie has had great success while learning a strategy that will serve her throughout her life. She reports that she feels she has met the challenge, although she adds with a grin that once in a while she has forgotten to take a Tootsie Roll reward.

9 Responses to The Magic of Tootsie Rolls