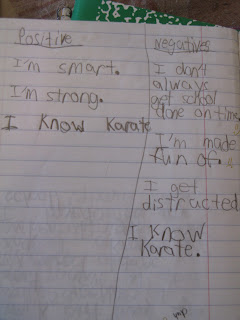 This was an assignment Josh did for a homeschool writing class. In addition to the ADHD, auditory processing, and sensory processing issues, Josh struggled with social nuances. Some of Josh’s struggles he understood and could identify. Other symptoms left all of us baffled, even Josh. I’m glad that even at this young age Josh knew he was smart and strong, so some of my truth messages were getting through to him in the midst of his challenges. It’s interesting to me that “I know karate” made the positives and the negatives list. Knowing karate was good for Josh, in that it provided an outlet for his excess energy and helped him develop coordination and self defense skills. It also allowed him to be part of a group sport, but one that was individualized so he could progress at his own pace. Knowing karate was a negative for Josh, because as soon as other kids found out he was training in martial arts they asked if he was a black belt and then wanted to take him on. Josh was never aggressive, so demonstrating his karate skills outside of class was not appealing to him. One of the first things most boys do in social settings is talk about their favorite sports teams and the sports they participate in. Josh was more interested in drawing and creating things than in sports, so he didn’t have much to talk about other than that he knew karate. This led to the inevitable challenges to prove his skills, which Josh did only when he absolutely had to for self defense. Even then, he ended the confrontation as soon as he could. This homeschool flashback provides a snapshot of a young boy’s emerging self perception. Teaching him at home gave me the opportunity to help him develop a balanced view of himself, which is revealed by this writing assignment as he recognizes some of his strengths despite huge challenges. By the time Josh reached adulthood, he had a mental list of positive and negative things about himself that was accurate and realistic.

One Response to Homeschool Flashback #1